How can we help you communicate your climate impact?

We’re revisiting how we communicate the amount of greenhouse gas emissions prevented through repairs at events and I’d love to hear your thoughts on how we can do this better.

While we’ve got pretty good calculations in place, we think we can do a better job helping people understand exactly what ‘we saved x kg of CO2e’ actually means.

At the moment we compare the amount of CO2e saved by your event or group to an activity that produces greenhouse gases, such as driving, watching TV, or manufacturing sofas. 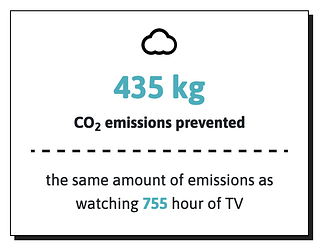 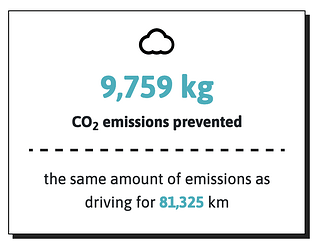 These ‘equivalencies’ need updating as the data behind them is quite old now.

But before we do that, I’m curious to hear from you…

Are these equivalencies useful for you? Are they easy to understand and do you actually use them to talk about your group’s environmental impact?

For example, here are two options:

Which do you prefer?

Hi James. I like it and more specifically the latter. In advertising I seem to remember being told some people move away from a ‘negative’ outcome whilst others move towards a more ‘positive’ outcome. As such I am guessing that some will respond to one and others the other i.e. there is no one answer and what you will get is opinions that slant towards that person preference. There was a study done in the US that looked at wording of signs to visitors of a Petrified Forest, visitors often stole small pieces of wood despite being asked not to. They trialled different signs and the wording had an effect on the rates of theft. I realise that is a slightly left field example but wording is relevant to the resultant action and behaviour of the person reading it, After all that my preference is the tree message with a slight tweak saying our event saved 435kg of Co2e, the same amount as 70 tree years. That’s growing 7 trees from a seedling all the way through to them being 10 years old. A bit wordy I realise…

I like the second one too as the TV one suggests we aspire to be couch potatoes!

But it would also be good to relate it to everyday activities, such as boiling 100 kettles of water or water for x cups of tea.

We should be clear about assumptions made such as using grid electricity with CO2e at Xg/kWh. This factor will change with time as share of renewables on the grid increases.

Thanks both, really useful.

It’s interesting to hear that you both prefer the tree planting approach, although I take your point, Chris, about different people responding better to different messaging.

I also like your suggestion of using ‘tree years’ or years of tree growth Chris. That could be a neater image. I’ll just need to make sure it checks out scientifically and how we could communicate it clearly with as few words as possible. (The plan is to design social-media-friendly infographics that the system will generate for events and groups - so the less text the better.)

James, your suggestion of using everyday activities makes sense to me too. I believe that was the original impulse behind using watching TV and driving. And I take your point about the changing electricity supply. That’s one of the reasons we need to update the current equivalencies - the grid has changed fairly significantly in recent years, at least in the UK.

We’ve been having a discussion internally about whether the consumption-based equivalencies might lead people to think things like “oh, I’ve saved x kg, so now I can watch 2 days of TV with “net zero” climate impact.”

At the same time, we’re also wondering whether tree-planting feels a bit greenwashy, especially with the controversy around many tree-based carbon-offset schemes being worthless.

Finally, we’re hoping to land on something that doesn’t rely too heavily on data or habits from one country (such as national energy mix or boiling kettles), as this tool is used by groups in a number of countries.

So here’s what I’m thinking:

Does that make sense as an approach?

I think it’s really interesting what Chris said about positive or negative vision. I guess we’ll never have the right way to compare it, but it gives a rough idea. And I agree it’s time to change the “scale” of equivalents. Not sure about the treeplanting though. As you said, with all the polemics and greenwashing it can include… A lot of companies use that argument as greenwashing, so maybe too touchy for people who know about the tricky part. But at least this “scale” is well-known by everyone.

What I prefer in the idea 2, is that it’s positive, and makes more of a “what did good” than “what “”“bad””“we have prevented from happening”

“watching TV” indeed doesn’t tell me how much energy a TV consumes. The driving is more relevant I guess, a lot of people drive and know how much fuel driving 81km represents.

I don’t have another idea for now, but it’s obvisouly better if it’s something people can relate to, as “not throwing away X sofas” for example. The “physical” amount is important. Maybe in m3 or something.
And indeed the culture of everyone is different, so the comparison will, in every way, speaks to some and not to others.

Maybe @Jonathan_Vigne and @Simon_Fremineur have some inputs to add, other ideas or as how our network (Belgium) would see this.

Firstly - yes the equivalencies are useful…I’ve used them in lots of presentations and our infographics to summarise our year, in the past. I think it makes some very rough idea of what we’re talking about.

Secondly - I’m not a fan of the TV or driving option, as I think it can lead to people thinking they can then do x & y because they’ve saved carbon…and TV and driving aren’t things that we’d suggest anyone aspire to.

I like the idea of something more positive, although tree planting seems to be the answer to everything in the press etc and that isn’t enough…and varies massively by tree species of course too

Although the benefit is that treess are a global thing.

I can’t think of an alternative at the moment, but things going through my mind are something around…no…it’s too late and my brain is done in

just words % carbon footprint of a country/Apple…carbon saved by having a vegan diet for x days…oyster restoration projects…ok mind, definitely a bit fried. But maybe something that compares to another carbon mitigating strategy, to help us pitch ourselves as a key part in the solution to carbon? (Maybe not very average person friendly). I’m stopping now

I like the idea of comparing with other carbon mitigating strategies but would like to see an example so that I can tell how it works in practice. Am also wondering if it would be possible to use volume of waste as I find it hard to visualise 1kg CO2 etc.

For our data, I’d discovered the ‘export event stats’ function which seems useful but I can’t understand how to get the ‘share event stats’ to work - possibly the usual technical shortcomings I have.

It sounds like there’s some enthusiasm for the idea of a positive or climate-action metric.

I agree that tree-planting isn’t perfect, but I think it’s a reasonable balance, being both fairly relatable (not everyone has planted a tree, but it’s fairly easy to imagine) and not too ‘preachy’ (like number of meals switched from meat to vegetarian could be, I think). As mentioned, tree planting is also quite a universal and static measure - it’s fairly global and doesn’t really change over time.

@Margaret_Hersee, the ‘share event stats’ function currently only gives you the option to embed the stats in a webpage that you control using an ‘iframe’. An iframe is essentially a way to display one webpage on another webpage. But you need access to the code of your site to use it, so it’s not the especially simple. As part of the work we’re discussing here, we’re hoping to add a new feature that you can use to generate pictures/infographics for your group and events and share them as normal images on social media.

Here’s an example:
At your last event, you saved 197 kg of CO2e. Using tree-planting as an example, we would add a new option to ‘share event stats’ that creates a picture a bit like this: 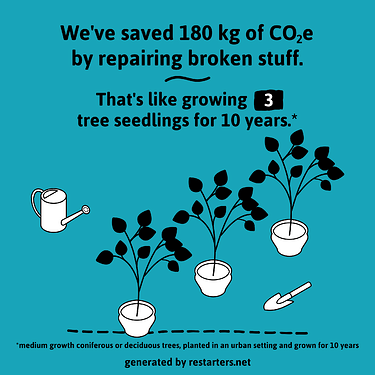 Assuming, probably falsely, that the whole UK repair movement rescued, say, 48 toasters (probably way off the mark but just for example purposes), how about:

“We rescued 48 UK toasters last year”
We could add (if it’s true!) - “we’re beating the French, 48 to 37”
This has saved us as a nation expending xxKg of CO2, (or better, yy tones of steel, elec etc - embodied carbon)" worth £xx to each owner.
What I’m trying so badly to express is the ‘residual effect’ or repairing something that would otherwise be thrown away. That repaired Toaster could last for another ten years, saving every day, so how about “my toaster is saving us all xxKg per month - how much could yours?”

I know that individual things like toasters are not recorded but they could be, making the figures far more accurate imho. The five categories that are currently recorded seem not as suitable to the task as they could be in my experience so far - so maybe reforming them would help bring new dataviz opportunities?
C.

Thanks for sharing your thoughts Chris. I think I see where you’re coming from.

At the moment, the intention is to help individual groups communicate and celebrate their impact, rather than focus on the collective stats for any given country. (Ultimately, we’re not in competition anyway).

I agree that it’s the residual effect of fixing something that we need to express somehow, hence the plan to use CO2e saved as our primary metric. I think the thing we’re grappling with is how to visualise what ‘x kg of CO2e’ actually means, as it’s a pretty abstract measurement for most people.

Totally agree too that recording more detailed repair data can make the figures more accurate. For reference, it is possible to record individual items, including toasters. There are currently 47 items categories available - more info on those here: How to log repair data from your event. Happy to help if you’d like more info about how that all works