Interesting research on why toasters fail

Wirecutter recently updated its reviews of “best” toasters, and included a very interesting section comparing design and materials used in current cheap/unrepairable toasters with toasters dating back to 1918 to 1930s (!). Lots of learning about durability of various alloys used in different products. I was however a bit disappointed that Wirecutter accepts toasters’ disposability based on their low cost

After testing 23 toasters for dozens of hours, we think the Cuisinart CPT-122 2-Slice Compact Plastic Toaster is the best, especially for the price.

In the same piece they also review a (very) expensive Dualit toaster, not mentioning that it’s fully repairable, but concentrating on how it doesn’t make the best toasts anyway, despite the high price

Anyway, I’d love to hear comments by Restarters, especially those of you who have attempted repaired toasters

And of note is the caption parenthetical about disassembly (which you shouldn’t attempt to do yourself).

Seriously? Why do we play the reprise that we’re all incompetent to do just about anything any more?

I’ll take apart my toaster if I damn well feel like it!!! 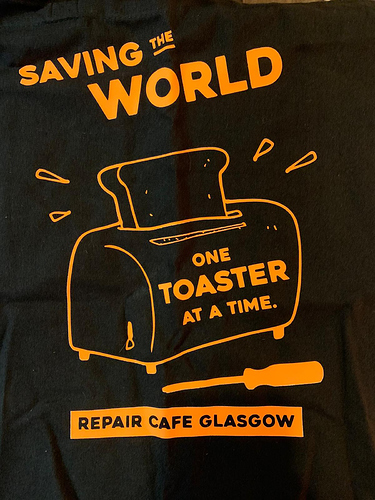 Who knew there was a Toaster Collectors Association. Is that for working toasters only?

I repaired my toaster, was a mechanical failure where a plastic tab had slipped out of position so the toast carriage wouldn’t hold down.

Being a little sceptical about blanket statements like “toasters aren’t made to last like they once were.” - are there stats to back that up? Citing surviving vintage toasters as evidence that vintage is somehow “better” than modern seems somewhat of a stretch; yes some can survive a long time, but I don’t see stacks of working vintage toasters around to support the generalization.

I’m still running a 25 year old Dualit. Getting in is easy - Philips screws only. No electromagnets, simple mechanical timer …

Yes - as far as I know the Dualit is fully repairable… the initial expense of the Dualit includes the cost of maintaining and making stocks of parts ‘for all time’ and sometimes in quite small quantities at reasonable prices, and the ordering and postage departments involved.

Of course the original design (from an engineering point of view) is critical… I well remember the family toasters [Morphy Richards] in the 1960’s, which were forever jamming, burning the toast, and burning out the miserable solenoid which operated the release (I had to rewind the coil for that). In the end we gave up, and bought a German ‘AEG’ toaster - a much better design, which has run for 50+ years. The key was more initial thought to the engineering and design, a cooler-run element ( no burn outs; crunchier toast) and better construction… these are not very ‘costly’ differences.

In the 1960’s as a schoolboy, I used to frequently repair ‘drop-side’ toasters using the little nickel cathode tubes from spent radio valves, to crimp the broken ends of elements together. The element always ran just a bit hotter afterwards! People were for ever poking the elements with forks and making short-circuits!

I disagree with the suggestion

That said, Beach told us it would be unlikely for the heating elements to be the main cause of malfunction. He said the more likely scenario for failure would result from an electrical malfunction, such as a delicate solder joint that breaks and causes an electronic component to give out.

I have probably done about 10 toasters over the last couple of years and there are only one has failed in this way. Of the remainder: